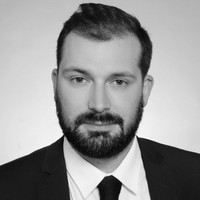 As a specialist in public affairs, Paul Azibert has accompanied institutional decision-makers, governments, local authorities and business leaders in their influence strategies.

After a short stint in international institutions where he worked on the African zone, Paul began his career in public affairs and communication in a Parisian agency (Image7) before joining the economic think-tank Fondation Concorde as director of studies and external relations. There, he worked on digital, health, defense, banking and crypto-assets issues as well as issues related to economic intelligence at the service of States and large groups.

Paul Azibert spent more than three years at CEIS and Avisa Partners where he developed influence strategies for players in the health, energy, digital and cybersecurity sectors, notably as head of public affairs for the International Cybersecurity Forum.

He also works on territorial development and economic intelligence issues and specializes in business diplomacy, more specifically on the African continent.

Formerly an elected official of Bordeaux, Paul holds degrees in public affairs from Sciences Po Bordeaux, in international relations from Coventry University, and in economic and strategic intelligence from IRIS.